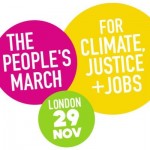 The People’s March
for Climate, Justice and Jobs
London 29 Nov 2016

The most crucial UN international summit of the decade (COP21 / CPM11 / Paris 2015) takes place in Paris from 30 November to 11 December.

Demonstrations around the world

On the eve, people in cities around the world will take to the streets to march for ambitious action on the climate crisis. From London to São Paulo, and Johannesburg to Paris, we will rise together to meet this moment with a single deafening message that can’t be ignored.

In UK there will be demonstrations in many cities on 28 November, followed by a major national demonstration in London on 29 November.

Raised Voices have prepared a songsheet and other singing resources – some familiar, some new.

And Sámi singer Sara Marielle Gaup Beaska has put a call out for people around the world to sing her Yoik in solidarity with indigenous people the world over to acknowledge the disproportionate impact climate change is having, and will have on their lives if we do not act now to reduce our impact on this earth we live on. Video with her story and song here.

Climate march coaches: climatejusticejobs.org.uk/transport (includes info for Paris 12 December).  If you know of others, let them know!